North Jersey District Water Supply Commission
The NJDWSC was created by the Legislature of New Jersey in 1916, and in that same year applied to the State for permission to develop the Wanaque River which had been recognized as a potential water supply as early as 1879. Permission to take 50 million gallons a day (mgd) – later increased to 100 mgd – from the Wanaque was granted. The initial contract with Newark was signed in 1918. In 1924 and 1925, contracts were signed with Passaic, Paterson, Clifton, Kearny, Glen Ridge, Montclair, and Bloomfield.

Beginning of construction of the Wanaque Dam
The first North Jersey District headquarters was in Newark, but just before the outbreak of World War II, the Commission moved to its impressive complex in Wanaque. Members of that first North Jersey Commission, all appointed by Governor James F. Fielder, were Laurent J. Tonnelle of Bayonne, George F. Wright of Paterson, Ernest C. Hinck of Montclair and William E. Ramsay of Perth Amboy. When the Commission organized in on May 16, 1916, it chose Commissioner Tonnelle as Chairman. The first Secretary was Nathan H. Pendergast and the Consulting Engineer was Morris R. Sherrerd.

The Wanaque Reservoir was constructed at a cost of $25 million to supply 100 mgd to the eight aforementioned municipalities. Water delivery began in 1930 after eight years of construction of a reservoir to hold 29.5 billion gallons of water. Interestingly enough, Wanaque, the home of the North Jersey Commission, has never been a subscriber. It has always had sufficient water supply facilities of its own.

As a result of a major drought which struck New Jersey from 1929 to 1932, the Wanaque yield was reduced from the original 100 mgd to approximately 85 mgd. It was obvious that the supply would have to be augmented from another source. With this in mind, the North Jersey District Commissioner looked toward the Ramapo River as a logical place for the added supply. The Commission in 1945 applied to the State Water Policy Commission for a Ramapo diversion. This was denied at the time, but the State reversed itself four years later when a new drought began. Total cost of the Ramapo program, which pumps water from the Ramapo River at Pompton Lakes into the Wanaque Reservoir was $5 million. By 1953, partners were assured a dependable yield of 110 mgd from the overall Wanaque project – 85 mgd from the original program and 25 mgd from the Ramapo diversion. In 1999, the daily yield can reach up to 173 mgd. The Wanaque Reservoir supplies the largest amount of water of any facility in the State of New Jersey.

The Commission occupies about one-fourth of the Wanaque land area. Many of the Commission’s employees reside in Wanaque and through the years they have served on the City’s various governmental agencies. In fact, one former employee – Anthony Guide – was Mayor from 1940 to 1950. Cooperation between the Commission and the Municipality has been a hallmark of the NJDWSC presence here in Wanaque.

This is a view of the tracks leaving the North Portal of the Wanaque Tunnel as it was on July 13, 1925. A train, used in the Reservoir construction project, can be seen at the opening of the Portal. 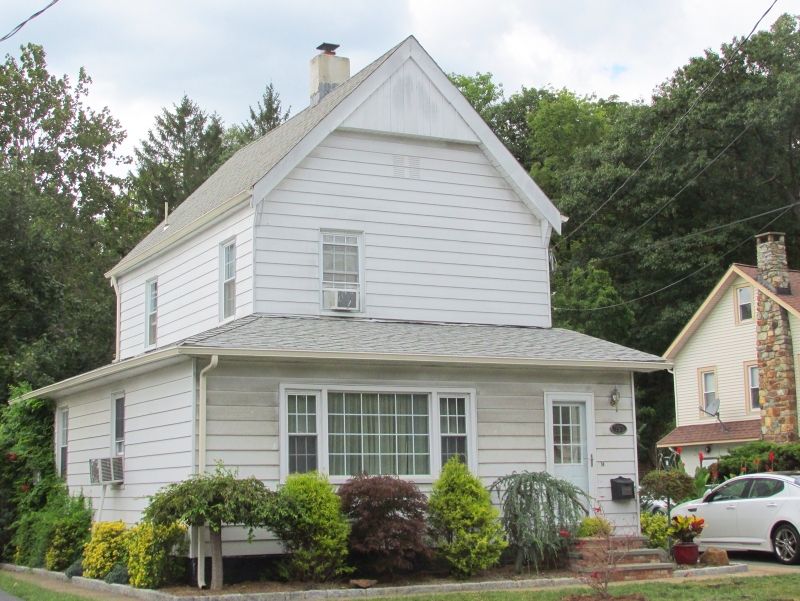 The heart of the Borough was both sad and happy with the coming of the Wanaque Reservoir: happy because it was to be an outstanding asset to the community, sad because the papermill and many homes scattered throughout the hills and valleys were to be replaced by the ten-mile stretch of the reservoir. 70 buildings and homes were removed, many in the Hook Road area, seven miles of highway and six miles of railroad were relocated.

Four small cemeteries had to be moved. The next of kin were located if possible and their preference determined as to the new burial ground. The Brown Cemetery was moved, according to the wishes of Squire Edward J. Brown, to a tract in the Midvale Cemetery and fenced in. There were sixty-five graves and tombstones all in good condition. The Ryerson Cemetery was also moved, according to the wishes of the family, to the Midvale Cemetery. At the request of the Board family, of the nineteen graves, three were reinterred in a lot purchased by the Reservoir Commission in the Pompton Reformed Church Cemetery. The old stones were repaired where possible, and new stones were provided to replace some not fit for removal. The Commission obtained brown stone from Connecticut and duplicated the old style printing so that the new grave monuments would be as much like the old ones as possible. The Erskine Cemetery was in a dilapidated state. There were few monuments and no record of burials. Since the location of some of the graves could not be known, the whole area to a depth of six feet was turned over and all the remains removed. Where identity was possible remains were placed, with the consent of living relatives, in Midvale Cemetery, Pompton Reformed Church Cemetery, and Butler Cemetery. Two bodies and headstones were transported and reinterred in Bernardsville Cemetery. The total cost under this contract for removing 256 bodies and 37 tombstones was $17,685.44.

Wanaque Dam under construction as photographed in November 1922.
Form being placed for a section of the Wanaque Aqueduct.
Reservoir construction site.